Marketing to Veterans As a Subgroup of Mature Consumers

This Veteran’s Day, there are an estimated 23.2 million men and women who have served in the American Armed Forces.  9.2 million are over the age of 65 (the Silent and Greatest generations and their elders).  As we recognize those who have given years (and lives) in service, marketers can and should consider the veteran population as a distinct subgroup of older consumers.

Here are five facts and marketing insights into the “niche” of elder veterans.

1. Veterans are well-educated and place great value on learning.

The “Servicemen’s Readjustment Act of 1944” – more popularly known as the GI Bill – was one of the most popular and transforming government programs of the 20th century.

Prior to this bill, higher education was not available to the middle class.  After it, the educational system was forever changed and the children of these veterans (the Baby Boomers) pursued schooling in even greater numbers.

In 1951, when my mother started college, her campus was dotted with Quonset huts – temporary housing for the WWII veterans who were pursuing higher education thanks to the GI Bill.  Many came with families in tow, and sat in classes with students 7 years younger than they.

Mom says that “for some of these guys, the war was the greatest adventure of their lives.”  They returned and pursued opportunities with zeal.  For most, this attitude has not changed with aging.

71% of veterans voted in the 2008 presidential election (vs. 63% of those without military service).  That’s 15.8 million men and women who felt a duty to cast a ballot, rain or shine.

* As the state with the largest population, California has the most people over age 65 (3.6 million); 2.1 million CA residents are veterans.

* Florida has the highest percentage of folks from the Silent, World War II (Greatest) and Depression Generations (17% of FL residents are over 65); 1.7 million from the Sunshine State are veterans.

* New York State has 2.4 million “elderly” and Pennsylvania boasts a 65+ percentage of over 15%.  Each state includes 1 million vets.

5. As these men and women age, their impact on healthcare will only grow.

“Veteran status of America’s older population is associated with higher median family income, lower percentage of uninsured or coverage by Medicaid, higher percentage of functional limitations in activities of daily living or instrumental activities of daily living, greater likelihood of having any disability, and less likelihood of rating their general health status as good or better.  The large increase in the oldest segment of the veteran population will continue to have significant ramifications on the demand for health care services, particularly in the area of long-term care.”

And a somber footnote.

The number of living vets is going to decrease steadily over the coming years.  Roughly 1800 veterans die each day. Marketers should seize this moment to understand … and, more importantly, thank … our veterans.

Some useful sources for s 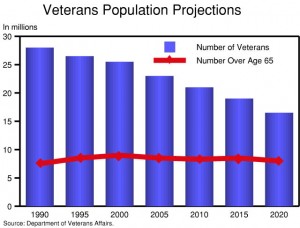 tatistics on US Veterans and older Americans in 2009: