Consider this scenario: A nation struggling with economic hardship and uncertainty; a president looking to connect with the public in a 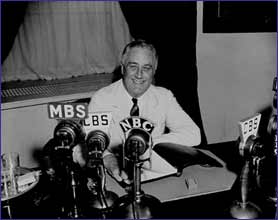 way that seems personal and relevant.  He turns to a brand new medium that’s spreading like wildfire and sends out his message “one-to-one.”  This was the scene on March 12 in 1933, when President Franklin Delano Roosevelt used radio to deliver the very first fireside chat.  For those marketing to Baby Boomers and beyond, the (no longer new) medium of radio is still a great way to reach a targeted older audience.

You can also read the 2018 update to this post detailing all of the new opportunities for reaching Baby Boomers through audio marketing.

Radio, which first arrived in the US in the 1920, was quickly adopted by urban citizens.  Today, it reaches more 77% of adults daily.  76% of Baby Boomers listen to radio, more than any other demographic cohort.

News/talk formats and public radio stations are especially appealing to mature, highly-educated listeners.  The average age of a public radio listener is 54.1 years old.  42% of NPR listeners are over 50 and 54% are college graduates.

In their “State of the Media Report,” The Pew Project for Excellence in Journalism notes that:

Age may be a factor of the differences between AM and FM listeners. Traditionally, most news/talk has aired on the AM band, where listeners tend to be older.

Will Digital Kill the Radio Stars?

With iPods, music on demand, the Internet and satellite radio all cutting into broadcast radio’s “turf,” is it any wonder that Pew writes “Radio is well on its way to becoming something altogether new — a medium called audio.”

But even as radio becomes audio, it’s still an effective way to market to Boomers.

In 2005, Arbitron reported satellite radio audience “more closely mirrors the age and gender profile of the average American than audiences of other digital forms of radio … 18% are age 55 and older.”  At the time of that study, another 18% were aged 45-54 – younger Baby Boomers (aka Gen Jones).  Satellite radio subscribers are also wealthier; they are twice as likely to live in a household with an income of $100,000 or more.  Older subscribers say they appreciate the ability to find music from their youth that is no longer played on broadcast radio; they also like filtering out the on-air chatter of commercial radio, sometimes perceived as offensive.

And, in 2006, Edison Research and Arbitron found that 26% of Americans over 45 years old had listened to radio streamed over the Internet in the last month.  Remember: Boomers are particularly time-pressed, often caring for elder parents and/or adult children (or grandchildren) while still working.  Internet radio allows them to listen when they want, and to the content or programming that’s most relevant to them.