What Percentage of Baby Boomers and Seniors are Gay?

Just as Pride month came to a close last week, Experian Simmons released a demographic spotlight report on gay Americans. One item of particular interest to us was a breakdown of the LGBT and heterosexual populations by age. 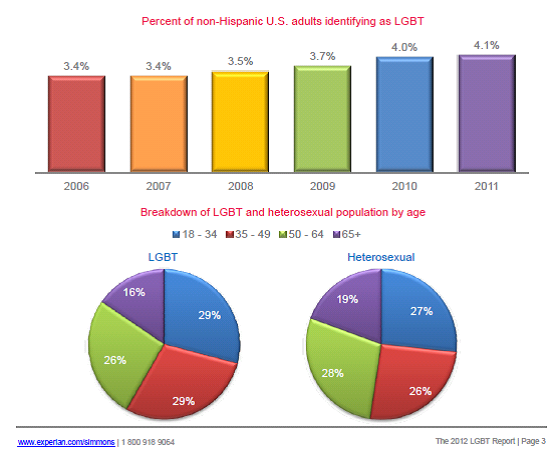 For a frame of reference, 2011 US Census data found that 13.3% of all Americans are seniors over 65. To download a free copy of Experian’s report, click here.

As the MetLife Mature Marketing Institute’s excellent report, “Still Out, Still Aging” put it, being LGBT makes aging both easier and harder. This is a group that has fought for and achieved remarkable social change:

“Born between 1946 and 1964, LGBT Baby Boomers advanced the U.S. gay rights movement and within one generation succeeded in changing social attitudes from seeing homosexuality as a psychiatric condition to winning same-sex marriage rights and acknowledgement of their civil rights in an increasing number of states.”

Yet more than 25% of these older adults fear discrimination as they age. And MetLife found 33% of LGBT Boomers live alone (vs. 18% of the general population). These active adults are more likely than the general population to turn to friends for help for anything from errands to emotional support to emergencies.

The LGBT Aging Project of Massachusetts has estimated that each week, 10,000 LGBT Americans reach retirement age. This is not a group to be overlooked. What is your organization doing to better understand or target the “gay and gray”?