My Nana turns 98 today, and in her honor we present some facts about what’s been called the “grandparent economy.”  Mary Furlong describes grandparents as “wealthy and willing to spend.”  And, while Nana is a card-carrying member of the Greatest Generation, marketing to grandparents today can’t be done without a better understanding of marketing to Baby Boomers.  Read on for some spending stats and a resource for those curious to learn more.

Baby Boomers are Grandparents, Too

What Grandparents Spend … and Spend On

Mary Furlong reports that grandparents possess $2 Trillion in spending power, and spend $52 billion on their grandkids.  They also make 45% of all non-profit contributions; their generosity is not limited to their own family.

The White Hutchinson Leisure & Learning Group has reported the average grandparent spends $1,027 total per year on grandchildren.  Those in the West are bigger spenders ($1,300 a year) while those in the East (including my Nana) spend less ($821).  Granddads spend 14% more than grandmoms!

While spending typically rises with the age of the child, those Baby Boomer Nonnies, Mims and Gigis with grandkids under 12 are most likely to eat at fast food joints, per Experian Simmons.

25% of all toy purchases are made by grandparents, but it’s not all toys & games.  Education (collectively, our grandmas and granddads spend $32 billion on tuition and other education-related expenses each year) and travel (more than 1/3 of grandparents traveled with grandchildren in the last year) get a healthy share of grandparent dollars.

An estimated 4.5 million US children are living in homes headed by grandparents, who often dip into their own retirements to cover the daily living expenses of their grandchildren.  Per the 2000 Census, 57% percent of grandparents raising grandchildren are still in the work force.  As raisingyourgrandchildren.com notes, “It will be interesting to learn what the 2010 Census will show.”

(Want to learn more about grandparents who are raising grandchildren? In 2007, AARP produced a series of state-by-state fact sheets – they’re a  little dated but available here: http://www.aarp.org/relationships/friends-family/grandfacts-sheets/.)

Learning More About Marketing to Grandparents

Beyond what they spend on their grandkids, grandparents are important consumers and should be thoughtfully targeted.  This chart from Mary Furlong shows why: 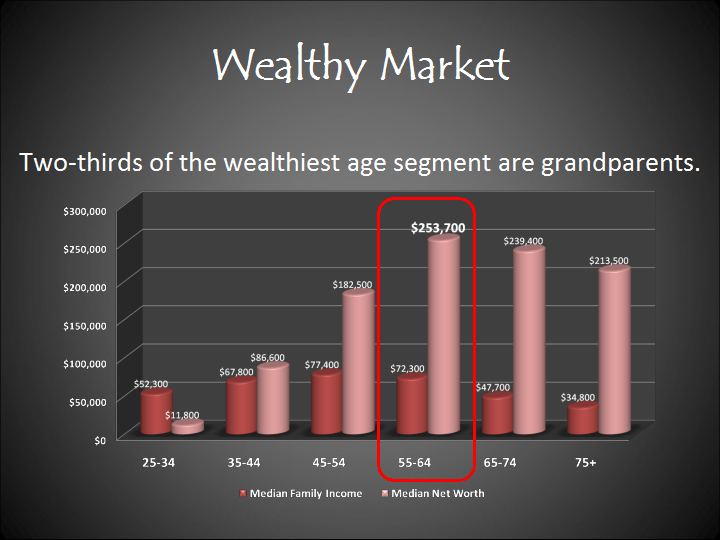 Want the inside skinny on how to reach out to and motivate grandparents who are Baby Boomers or beyond?  Grandparents.com CEO Jerry Shereshewsky will be the luncheon speaker at a May 14 workshop in New York City, sharing tips and insights.  (Creating Results’ Todd Harff is another featured speaker at the conference, “How to Build Your Business With the Mature Consumer.”)  To find out more and register, follow this link.

Hmmm, Manhattan in May.  Maybe I should bring my Nana!

3/13/12 UPDATE: Thanks to Sarah Lancaster at SeniorCare.net for alerting us to a broken link (now fixed) and sharing a new resource with us – this post on their site about Grandparents Raising Grandchildren.