This week our top mature marketing links of the week have a little international flavor. As the old nursery rhyme says, we’re going “to market, to market.”

CANADA: Are Toronto seniors being priced out of the housing market? Stephen Winbaum reports that concerns were raised at a recent public meeting in that city. (http://bit.ly/1MjKwAP)

Investors seem focused on high-end condo development, reducing the number of rentals while raising the price. Renters are one half of the city’s occupants and many are seniors. John Plumadore, the Chair of the Federation of Metro Tenants’ Association, said “We want to live independently but we’re being priced out of the market.”

Adina Lebo, Chair of the Canadian Association of Retired Persons (CARP) Toronto, predicted a doubling of the Boomer generation over the next 20 years, many lacking in retirement savings. According to Lebo, 60% of the nation’s population are without industry pension plans and will need to survive on Canadian Pension Plan (CPP) and Old Age Security (OAS) – a monthly average of $1,200.

“You can’t even pay your rent in Toronto let alone go to doctor appointments and ride on public transportation on that money.” She called boomers the first generation going into retirement at 65 with a debt load of over $100,000.

UNITED STATES: “The seniors housing market is the picture of health these days” or so says a Bridge Investment Group executive in Commercial Property Executive. Believing that the aging Baby Boomer market will drive demand, the group recently completed the raising of $735 million of equity capital for the acquisition of seniors housing and medical property assets. (http://bit.ly/1IYgLD4)

Contrast that with the concern expressed by Beth Mace of the National Investment Center for Seniors Housing and Care (NIC) earlier this year. “In some markets it is concerning that there is a fair amount of product underway,” NIC Chief Economist Beth Mace was quoted as saying during a Senior Housing News webinar. “A market like San Antonio that has 1,600 units under construction is concerning given what’s going on in the Texas economy and given its occupancy rate of 88.1%, which is below that of the primary and secondary markets.” (http://bit.ly/1IwQKJD)

However, NIC’s Chris McGraw offered a different opinion in National Real Estate Investor in an article on July 27. “Outside of the Dallas, Houston, San Antonio, New York and Chicago metro markets, construction activity drops significantly … Most markets have manageable levels of new construction, with several having no construction at all.” (http://bit.ly/1MX0aSW) 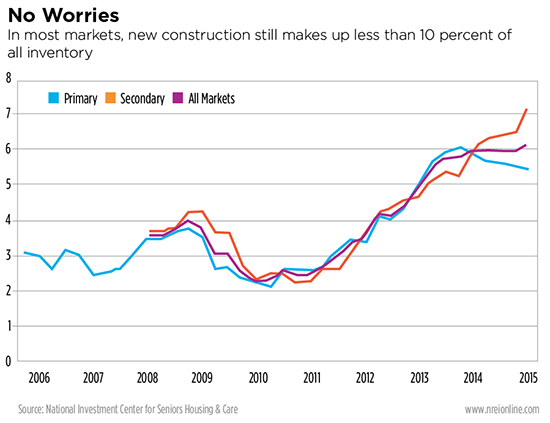 What’s your opinion about the United States seniors housing market? Please share your thoughts below.

CHINA: There are both challenges and opportunities ahead for China’s tourism industry in targeting 65+ senior travelers, per a recent East China News item. (http://bit.ly/1HAv0IO)

There are now more than 202 million Chinese residents over the age of 60, and domestic tourism revenue is expected to increase. Industry pros say travel-related businesses will need to make some changes to seize the opportunity but the pay-off seems promising.

A survey conducted by the company showed that 93 percent of those middle-aged and elderly consumers polled planned to travel this year. They would also spend more money on their trips than younger tourists.

Were there any critical news stories about boomers, seniors or mature marketing that we missed last week — global or local? Please help us learn more about YOUR market in the comments section, below.