Mature Marketing Links of the Week – Elder Care – Who will facilitate? Who will fund?

There’s a wonderful Yiddish proverb my father has quoted to me frequently: “Man plans, and God laughs.” This week’s round-up of top Baby Boomers marketing links touches on plans made and un-made.

1. MOST SHARED: Ever wonder what purchases upscale Baby Boomers and GenXers have planned? Of course you have. These are folks with a net worth of at least $1 million living in a household with income of at least $250,000, and more than half are planning a luxury purchase this year. Definitely consumers to covet.

The Shullman Research Center has released statistics that point to some differences in purchase plans between the cohorts. For example, while 98% of upscale Boomers intend to buy leisure travel, only 65% of upscale GenXers share that plan. The younger group does plan to make their home life more fun with premium beers and accessories, as the following chart illustrates: 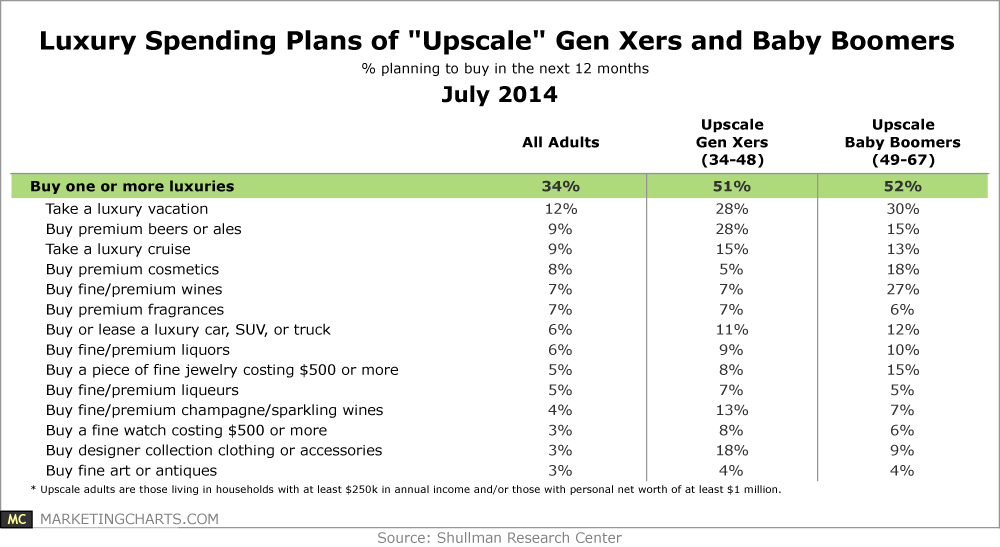 We like to remind people that to understand mature consumers, it’s as important to consider lifestage as it is to consider demographic factors as age and income. In reporting the Shullman research, MarketingCharts noted this:

“Upscale GenXers, it seems, simply have different priorities than their older counterparts. For example, among an assortment of financial goals, they’re more likely to want to become financially independent (31% vs. 25%), provide for their children’s college expenses (51% vs. 33%), buy a home (29% vs. 3%), and start a business (22% vs. 1%).”

These are all very appropriate priorities for the lifestage of GenXers. Read the report: http://bit.ly/1MFy51k

RELATED: Check out our Travel category for more insights and stats for marketing to Baby Boomers and seniors.

2. MOST CLICKED: Curiously, the Shullman study found that GenXers are far more likely than upscale Baby Boomers to be worried about their own health (43% vs. 27%). This reflects a concerning trend among Boomers to not be thinking or planning ahead for their health and healthcare as they age. It’s an even trickier question for what Next Avenue calls “elder orphans” — childless Baby Boomers.

“One study predicts that about a quarter of Boomers may become “elder orphans.” That’s a newly coined term for people who reach old age with no family or friends left, like the 81-year-old North Carolina man who made the news in May when he called 911 for food because he had no one else to turn to.

Family members provide about 70% of long-term care services, according to a survey by the American College of Financial Services. Not only are more Boomers childless, those who do have children have fewer than the previous generation. Trendsetters from the start, the Boomers have spawned a new phenomenon: caregiver shortage.”

Learn more by reading the article in Next Avenue: http://bit.ly/1VW2lJh.

3. Also of note: People turning 65 (which of course, includes those Boomers born between 1946 and 1964) have been projected to spend nearly $140,000 on average for their long-term healthcare; more than half from their own bank accounts. http://bit.ly/1K0hZKy

What are your organization’s plans for marketing to Baby Boomers? Have you begun anticipating — and perhaps taking special approaches with — “elder orphans”? Please share your insights below in the comments section.