Each week, we recap the news items that most engaged our followers over the past week.

This week, a Reuters Institute study explains how digital media has overtaken print media as a primary news source — for some generations, that is –, while a study from MarketingCharts emphasizes the importance of using radio to advertise to Generation X.

Also, we take a look at how news headlines often say one thing, but mean another — especially in senior health and aging industries.

MOST CLICKED: The Reuters Institute Digital News Report 2016 has confirmed what has been obvious to marketers and consumers for years now: the adoption of digital platforms as a means of accessing the news has led to a decline in the print news industry.

The study was conducted by YouGov from the end of January to the beginning of February using an online questionnaire, with the end goal being to understand how news is consumed throughout the world.

Though the study included participants from all demographic ranges, there were some key findings that marketers in the senior living industry will find helpful as a they determine how best to communicate with the new generation of seniors.

One key finding is that television is still considered the main news source among older adults, as evidenced by the chart provided below. However, even for the oldest adults, online news is slowly but surely becoming more important.

Interestingly enough, the chart shows that 25%of adults 55+ use online media (including social media) as their go-to source for news compared to just 12% for print.

When it comes to advertising, the majority of senior living communities most likely lack the budget for a national (or even local) television spot to promote their community and it’s services. As such, print has proven to be a popular medium through which marketers can reach Baby Boomers and seniors.

For marketers who are still prioritizing print over digital for the 55+ demographic, it may be time to reallocate your resources from print to digital. This is not to suggest abandoning print altogether, but the numbers show that digital has overtaken across all but one age group, and this is a trend that is likely to continue in the coming years.

Senior services marketers must ensure that all of their digital media is mobile optimized so that those viewing their website can do so without the difficulties that come with sites that aren’t optimized for mobile use, such as having to scroll left and right to read a sentence because the text doesn’t all fit on the screen.

To some, these changes may seem unimportant, but a poor user interference could result in your audience not wanting to make the extra effort it takes to read the information on your site.

MOST SHARED: Despite results that show that the popularity of radio also has declined as a source for news and advertisements, a new study from MarketingCharts suggests that radio is still an effective means through which to advertise, especially to Generation X (ages 35-49).

As seen by the chart below, radio ads rank as the seventh most effective way to influence Gen Xers through advertising. This is higher than both magazine ads and print ads though lower than television. In fact, radio was the only traditional media to experience increase from 2014 to 2016 in regards to purchase influence among Generation X. 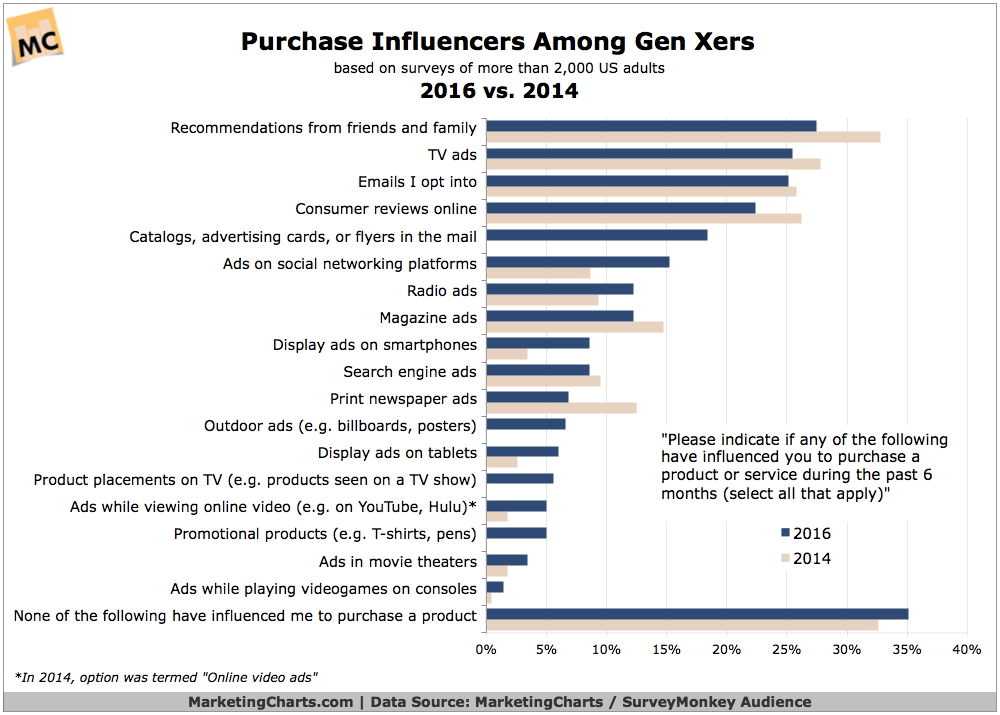 For senior marketers, Gen Xers are only a few years away from seriously considering senior products and services, such as CCRCs. Already they influence or have input into their parents’ decisions. It’s time to consider devoting resources to radio advertising to supplement your digital marketing campaigns in order to meet your target audience where they are.

To read more about the MarketingCharts study, click here.

MOST DESERVING OF MORE ATTENTION: Distorted headlines are to be expected in news matters such as politics, but they appear to be plaguing senior health and aging news items as well.

Last week, senior health / aging technology blogger Laurie Orlov took a look at some of the more sensational headlines and provided commentary on why they might be deceptive to readers.

One headline that caught Orlov’s attention was Seniors who Live Alone are Likeliest to Rate their Health Highly. This title suggests that seniors living on their own are healthier than those who live in a community or with a caretaker, but Orlov saw through the deceptive headline.

‘”People over 65 who live alone were more likely to describe their health as excellent or very good than were seniors who live with others, according to a study exploring connections between older Americans’ health status and their living arrangements. That may be because when seniors encounter serious health problems and mounting physical difficulties, they often stop living by themselves and choose to live with others for support, they speculated.”

Ya think?  And could it also be that these seniors want to stay living alone and answer accordingly when asked about their health?’

While that was just one of the distorted headlines brought to the forefront by Orlov, there arevaluable lessons to be learned for senior industry marketers.

First is make sure that the content that you create for your audience matches what the headline is advertising. You risk the chance of frustrating your readers when the content strays away from what was advertised in the headline. 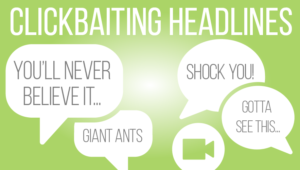 If this happens frequently enough, potential customers will likely seek out other avenues through which they can get the information they need.

In addition, do not make claims that you cannot substantiate. A number of the articles Orlov spotlighted make claims in their headline, but do not give any information to support them in the article, and in some cases, even state the opposite of what their headline claims.

It’s evident that this is a point of contention for Orlov, as it should be. No matter the age group, your audience doesn’t want to be told something, only to later be told that it’s not true or that it can’t be proven.

In the end, they will feel like they’ve had their time wasted and are unlikely to trust you or your advertising in the future.

For Boomers and seniors, the key is to be transparent and provide them with the information they want (such as prices), and be able to substantiate claims that your product or service will somehow enhance their lives.