Some Mondays our recap of the top mature marketing links is filled with fun and frothy items — wine! brain games! leisure travel plans!

And some Mondays we get to share articles and resources related to heavier topics.

As the philosopher Thomas Carlyle said, “There are good and bad times, but our mood changes more often than our fortune.”

Today’s featured articles have an inherent mix of the “good” and the “bad,” and we hope soon there will be changes to mood and fortune.

MOST SHARED: “Exploitation on social media is a form of abuse.”

NPR reports that officials from The Centers for Medicare and Medicaid Services will begin checking the policies of all nursing homes to be sure they are explicitly prohibiting staff from taking (and posting) demeaning photographs of residents. A memo sent to state health departments also “calls on state officials to quickly investigate such complaints and report offending workers to state licensing agencies for investigation and possible discipline.”

Why is this even necessary?

Because of a horrifying increase in the number of social media posts by employees at skilled nursing or assisted living communities which show older adults in demeaning or even abusive situations. 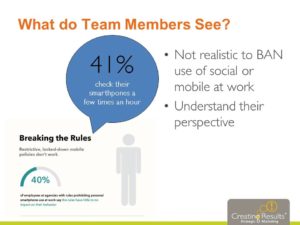 Earlier this summer I had the privilege to speak alongside and learn from Kathleen Heren, a Long Term Care Ombudsman and Executive Director of the Alliance for Better Long Term Care. We had been invited by LeadingAge Rhode Island Director James Nyberg to talk with members about “Social Media and Resident Rights.”

Kathy and I were rather a Mutt & Jeff pairing. She sees too frequently the bad of technology and is happily anti-cell phone, anti-social networking. I spend significant amounts of time focused on the good and often evangelizing social media marketing. I’m hopeful we hit the right balance about the need for both proactive policies and swift reactions to social media abuse.

Kathleen stressed again and again that it’s about PRIVACY.

I stressed that helping all employees understand that means you must have a clear policy and it must be shared again and again.

Some of the excellent points Kathy made at the LeadingAge RI session included:

One piece of advice that sparked discussion was to consider video as one of the many vehicles you’ll use to get the point across. Everyone learns differently, and younger employees are less likely to slog through long, boring written treatises.

Jim, Kathy and I liked this one from the Dartmouth-Hitchcock Health System:

If your organization is taking a look at its policies, here are several helpful resources from that session:

Read about moves to prevent and punish social media exploitation via NPR: http://n.pr/2aVyofb

And please, share your concerns, advice and stories about social media and resident rights in the comments. The only way we’ll make change happen is when we work together.

MOST CLICKED: “Baby boomers are taking on ageism — and losing.”

A disheartening headline in the Washington Post sums up a very pervasive problem: Workplace age discrimination.

One example given was of an experienced worker who was denied a position because the prospective employer worried he wouldn’t be able to take supervision from a younger co-worker. His take? “If I felt like I was going to be dissatisfied in the position, I wouldn’t be pursuing it.”

‘That disagreement goes to the heart of the awkwardness that baby boomers are now feeling as they enter the last years of their working lives. Often needing to stay in jobs longer than they anticipated to shore up savings depleted during the Great Recession, or simply wanting to remain active further into their lengthening life spans, they’re coming up against a strong preference in America for youthful “energy” and “innovation.”

… Older workers have the misfortune of wanting to work longer just as a new generation is trying to get an economic foothold. In a weak economy, companies are sometimes all too happy to dump veteran employees, with their higher health-care costs and legacy pensions, for younger ones who expect neither.’

The “good” at the heart of the issue is the willingness, desire and ability of older adults to work later in life. The “bad” includes the perception of older adults as unwilling or unable to work successfully with other generations.

Do YOU feel positive change is possible when it comes to age discrimination in hiring? Please share your thoughts in the comments section.