Who Has A House Phone Anymore? Not Baby Boomers!

“A mother is a person who seeing there are only four pieces of pie for five people, promptly announces she never did care for pie.”  -Tenneva Jordan

Creating Results would like to wish a belated Happy Mother’s Day to all the mothers out there. You deserve the entire pie.

Each Monday we share the most engaging and insightful content from the previous week. First up, the U.S. Census Bureau has found that the total number of Millennials in the U.S. has eclipsed total Baby Boomers.

Then, gfk.com reports that over half of adults  in the U.S. live in “cellphone-only” households, with 40% of those households belonging to seniors.

The graph depicts the total U.S. population by age. 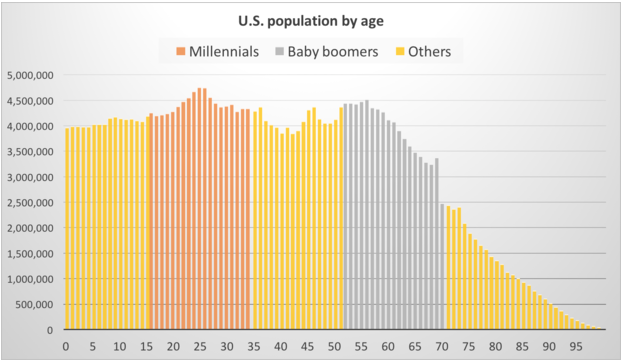 In fact, in 2010 Baby Boomers accounted for about 25% of the U.S. population (a decrease of 3 million people).

As marketers, we must be sensitive to what these population shifts mean to our target market. Should we be switching our marketing efforts to adult children or even Millennials? The only thing we know for sure is young people are taking over!

Most Clicked: Cell Phones Are Everything… Even to Seniors

According to a recent GfK MRI Survey of the America Consumer®, more than 52% of adults in the U.S. live in cellphone-only households. That percentage has nearly doubled since 2010 when it was just 26%.

Interestingly enough, the number of seniors (defined as ages 65 and above) living in cellphone-only households, has quadrupled since 2010.

The fact that Seniors are ditching their landlines makes sense when we look at everything they are using their cellphones for. When Creating Results conducted our Social, Silver Surfers national research, we discovered that more than half of those who were surveyed are in fact using mobile devices to access the internet some or all of the time. (All survey respondents were over the age of 40.) Why have a landline when seniors are using their mobile phones so heavily anyway? 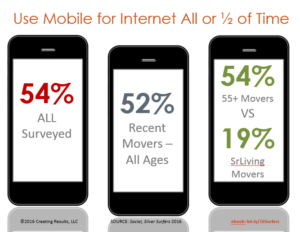