Monday! Let’s jump right into our recap of last week’s top resources/articles for those marketing to baby boomers and seniors. These two items tied for clicks and shares.

1. Consumer packaged goods spending by younger baby boomers (born between 1956 and 1964) has consistently been higher than that of their elders throughout the economic downturn, finds Symphony IRI in a new report — “Baby Boomers: Riding the Wave of Diversity.”

Symphony reports younger boomers spend nearly 10% more than older baby boomers (born between 1946 and 1955) and more than 25% more than Silent Generation shoppers (which this Symphony IRI report defines as born between 1925 and 1945). Spending overall is still down, as shoppers of all ages continue to make cuts, but the Boomer impact is significant. As John McIndoe writes in the introduction,

“One quality the silent generation and baby boomers have in common is the profound impact their shopping patterns have on today’s CPG, retail and healthcare industries. Silent generation members are living longer than any previous generation, and they are shopping much later in life than their parents. To maximize their longevity, members of this group are ―power shoppers when it comes to healthcare and health-related products. Boomers share a similar affinity for products that help them live life to the fullest. And, simply based on their sheer numbers and spending power, they continue to have an enormous impact on CPG and retail.”

Maximize longevity … live life to the fullest. I was struck by two charts in this report, which should provide inspiration and insight to those in other industries.

First, a breakdown of where boomers and seniors are spending their money.

This should give you ideas for partnerships and co-promotions. For example, a continuing care retirement community targeting Silent Generation seniors could find interest in a CVS “brown bag” review of medications. An active adult community targeting pre-retirees could team up with a local Club for a special event.

Second, a look at how each of four age groups, including Gen X, younger and older baby boomers, and seniors are using the Internet to learn about products and keep their costs down. 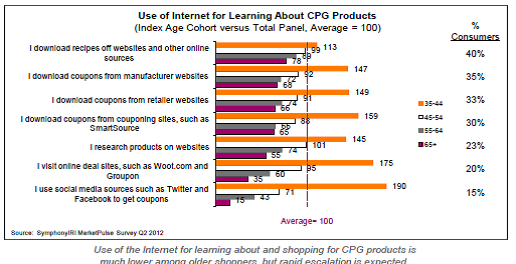 The older the target, the more websites trump social media marketing. So … where will you invest your team’s time in creating and promoting fresh content if you’re aiming your product at seniors?

2. As the market improves, baby boomers consider their next housing move but some face roadblocks. On the positive side,

“I think people are sick of waiting,” said Jennifer Darby Metzger with ERA Justin Realty, in New Jersey. Even if conditions aren’t perfect yet, there will be some boomers who don’t want to wait forever and take the encouraging market signs as a cue to get moving.

And on the not-so-positive,

“Lots of baby boomers are not in the position they thought they would be in 10 years ago,” [said Kelly Sweeney, chief executive of Coldwell Banker Weir Manuel in Detroit]. For some, 401(k) savings have eroded, while others have lost jobs and have been unable to find employment to replace their incomes at the same level. They might be upside down on their mortgages, or have lost so much equity they’re afraid to buy again.

How are you feeling — are you seeing the upside or the downside of the housing market, consumer products spending or anything else? Please share your thoughts in the comments section below.