“Little Things Can Mean A Lot.”

Each Monday our team recaps a few of the “little things” that meant a lot to our subscribers and followers over the past week. Articles that inspired,  stats that answered a burning question, and more.

Taken together week-after-week, these LITTLE things can have a BIG impact on integrated marketing programs aimed at baby boomers and seniors.

MOST CLICKED: A tie!

Lois is senior editor at McKnight’s Senior Living, and she recently spent a few days at a senior community, trying to view it as a future resident might.

Most of her BIG insights came from SMALL actions that represented lifestyle and community culture. Things like:

The website backed this up, with lists of amenities, daily activities and downloadable calendars.

As Lois writes, “the little things … added up to my first impressions of this community … giving prospective residents and their families a taste of what life in the community might be like for them.”

I have had the privilege of being part of the Creating Results team for 12 years. There have been so many changes in that 12 years! This past weekend a friend asked me when web marketing first became such a focus of my job.

Maybe someday soon I’ll be asked when mobile first became such a focus of every marketer’s job.

Because while baby boomers and seniors have historically lagged the typical U.S. internet user in ownership / use of mobile devices, the times they are a changing.

eMarketer notes, “Smartphone ownership among baby boomers continues to grow, but boomers are still much less likely than millennials and Gen Xers to own such a device.” Roughly 6 in 10 boomers will own a smartphone this year, vs. 9 in 10 Millennials.

As with much of the research and conversation related to boomers, however, there are distinctions between the older members of the cohort and the younger ones. (Click here for a breakdown on the generational cohorts ranging from The Greatest to Z.)

eMarketer created two instructive charts based on AARP research. For example, a 52-year-old Trailing Edge boomer is more than 2x as likely to own a smartphone as a 70-year-old Leading Edge boomer.

And what those two boomers do on their devices varies as well.

Utilitarian tasks are the dominating activities for older boomers – emails, directions, news – while younger boomers will pursue things that have more of an entertainment value – surfing the web, using social sites, watching shows.

Another benefit of being part of this team of leaders for 12 years is that sometimes I get to say “You heard it here first.”

We’ve called email the “killer app” for years, and noted the fondness that older adults have for technology that simply gets the job done in all three of our Social, Silver Surfers studies.

Utility. BIG benefits from things that seem LITTLE (or at least not so splashy) to other generations: That’s a tech trend that is consistently appreciated by both younger and older boomers.

MOST SHARED: The 10 Highest-Ranking Senior Living Operators of 2016

A second-bite of the Monday round-up apple for McKnight’s Senior Living.

The team reported on the “Best of” companies operating senior living communities across the nation, based on ratings placed in SeniorAdvisor.com. 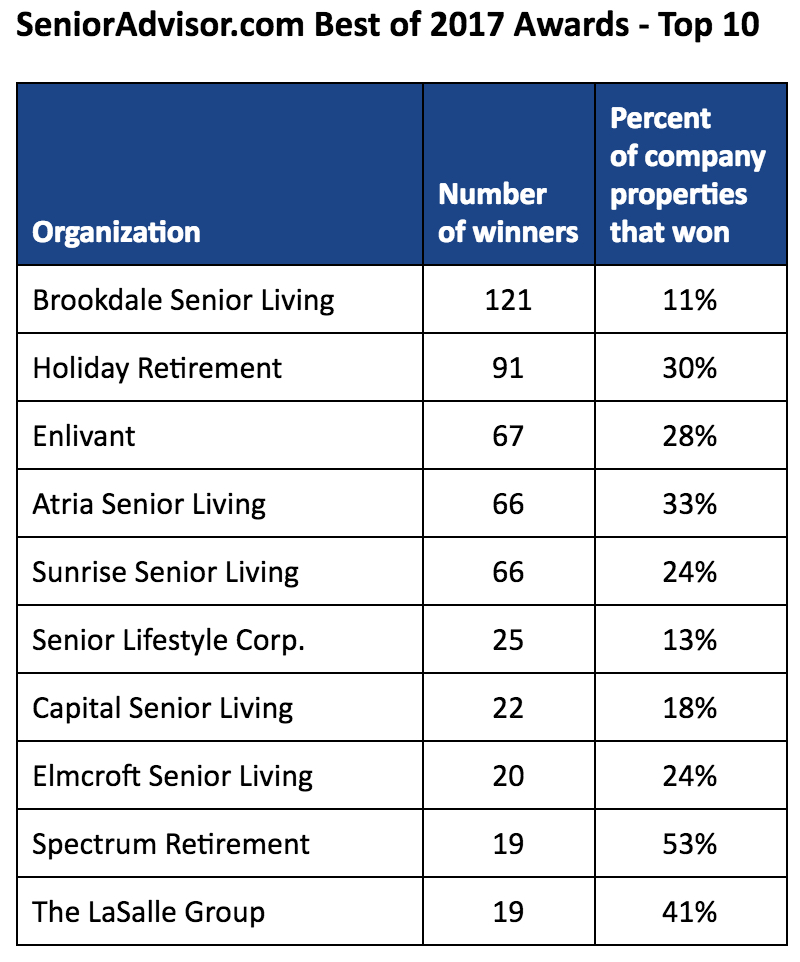 While Brookdale had the largest number of winners, it was The LaSalle Group which had the highest percentage of properties that maintained an average overall rating of at least 4.5 out of 5 stars from SeniorAdvisor reviewers.

Read more about the ratings: http://bit.ly/2kagaX0.

It would be a BIG deal to hear what LITTLE questions or comments you have! Please share your thoughts below.