One of the benefits of power outages is you catch up on reading. So last week, day 4 post-Irene and still off the grid, I finally had time to read an excellent study from the Brookings Institution, “The Uneven Aging and ‘Younging’ of America.” Study author William Frey looked at Census data from 2000 to 2010.  Here are some statistics related to baby boomers and aging in place that jumped out from his analysis:

* Nationally, the over 45 population has grown 18x more than the under 45 population. We can thank the Baby Boomer s (born 1946-1964) for this. As they have shifted into middle age, so has America. 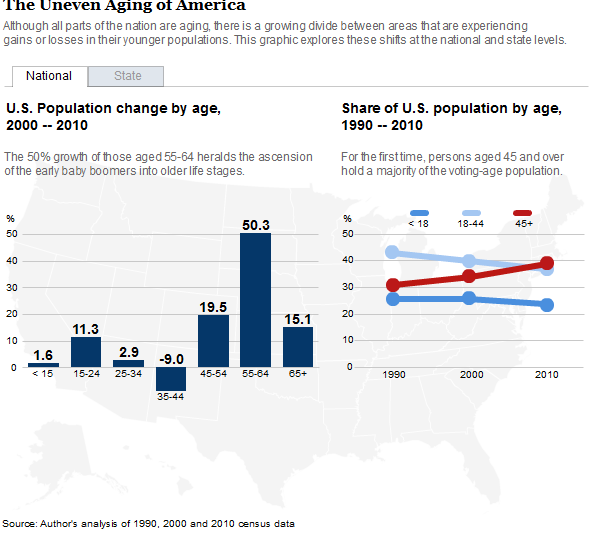 * The median age in each of the 50 states has gone up. The increase in median age is most notable in the Northeast, where the average person has gone from 34 years old to 39.2 years old. Maine, Vermont, New Hampshire and Connecticut now rank among the oldest states – hello, New England! West Virginia, Florida and Pennsylvania round out the top 7.

* Texas, the Southeast and the Intermountain West have moderated the effects of the aging population thanks to immigration and migration of young adults attracted by healthy, diversified economies.

* The Sunbelt has seen the biggest growth in its over 65 population, and the senior population is growing in states not typically associated with retirement.  As Frey put it, “Areas that show growth in these seniors, due both to ‘aging in place’ and migration, are likely to benefit from their above-average economic attributes.”

* And, there is a “senior explosion in the waiting” in areas – again, the Sunbelt – where Baby boomers attracted by weather, knowledge-based economies and college towns have been moving in the past decades.

* When the Baby Boomers were actual babies, they were likely suburban babies. These were the areas where young families bloomed.  When they had their own families, they raised them in the suburbs.  And now, they age in place.  Fully 40% of the suburban population is over 45.

What do you think these statistics mean –for marketing, for health care, for your business?  Are you adjusting your plans based on these population trends?  Please share your thoughts below.