Hello, Monday. How’d ya sneak up on us so fast?

Here’s our weekly round-up of top resources for marketing to 50+ consumers – links, articles and reports that earned the most clicks, shares or discussion last week. Did we miss anything? Please share your “must-reads” in the comments section.

1. MOST CLICKED: 5 Ways social media has ruined marketing, a tongue-in-cheek look at how this new form of interacting and communicating has changed marketing. By Robert Fleming of the eMarketing Association, who begins:

“First of all I am old. How old, let’s just say I remember a time when Beatles music was not played in elevators. Therefore I remember fondly the “old days”. So I get a bit nostalgic thinking back on time when there was really just newspapers, TV, radio and direct mail as key advertising elements (ok billboards too).”

2. MOST SHARED: In 2011, 1 in 6 Americans were involved in unpaid eldercare, per the new American Time Use Survey released by the Bureau of Labor Statistics. Or, as US News put it, the “Age Wave Creates Nation of Elder Caregivers.” Key details: 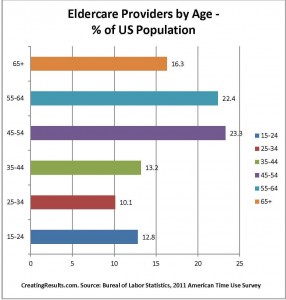 –Of the 39.8 million eldercare providers in the civilian noninstitutional population, the majority (56 percent) were women.
–Individuals ages 45 to 54 and 55 to 64 were the most likely to provide eldercare (23 and 22 percent, respectively), followed by those age 65 and over (16 percent).

3. MOST COMMENTED: As word spread that Orbitz was steering Mac users to pricier hotels than to PC users, the AARP asked on Twitter “Does it bother you?” My response was “not really.” My reasoning is that Orbitz was a business and was supposed to be making money. They used the data available to them to gain insight into their customers, then tested whether a specific segment would pay higher prices. And they were successful. I even offered a non-travel example, how makers of wine discovered that a fancier name could fetch $2 more a bottle.

We received several comments on this, ranging from “fair point” to “it was a betrayal of trust and a deceptive practice.” What do you think of what Orbitz was doing and the fall-out?