Only 6 days until LeadingAge Annual Meeting in Denver! Looking forward to sharing insights into older consumers at our booth, #1443. In the meantime, here are the resources and links which got the most attention in the past week from those marketing to baby boomers and seniors.

1. MOST CLICKED: (Okay, you guys are trying to get me in trouble, aren’t you? My poking fun at the boss got the most clicks last week!?)

2. MOST SHARED: No time for Tempe? More baby boomer retirees are passing over AZ, FL for “unconventional” locations, reports the Associated Press in their “Big Story.”

“Boomers and retirees these days are considering a much wider range of destinations for retirement, often choosing states that don’t commonly come to mind, such as Maine and Montana,” said  Mary Lu Abbott, editor of Where to Retire magazine. “Yes, the Sun Belt remains popular, but many people prefer a four-season climate and enjoy the changing of seasons. They seek towns that are safe and have active, appealing downtowns and good hospitals nearby, and increasingly they’re looking for places with a lower cost of living and lower overall tax rate.”

… With baby boomers now reaching retirement age, they’re looking for places that are walkable with good restaurants, volunteer opportunities and perhaps college courses they might be able to take, said David Savageau, author of “Retirement Places Rated,” now in its seventh printing. They’re also looking for places with familiarity, where they’ve visited on vacation or perhaps spent summers as a child.

– The Jewish community is thought to have a larger share of people ages 65 and over than America generally, notes the Arizona Jewish Post in an article on how Jewish communities are preparing for / grappling with the baby boom. From medical help to heritage travel, find out what some synagogues and Jewish centers are putting in place: http://bit.ly/T4FaOW

– Aging tech expert Laurie Orlov says the “villages” model has “the buying profile of a yard sale.” She shares a report on the lack of financial sustainability in the village movement in a recent newsletter: http://bit.ly/TTjdSS

– The newest report from the Pew Forum on Religion and Public Life on the rise of “nones” – aka, people who say they have no particular religious affiliation – is fascinating. 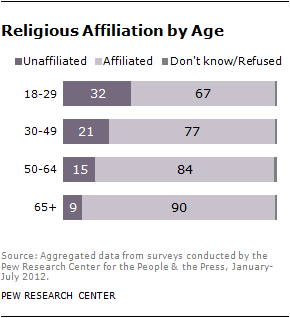 “The growth in the number of religiously unaffiliated Americans – sometimes called the rise of the “nones” – is largely driven by generational replacement, the gradual supplanting of older generations by newer ones. A third of adults under 30 have no religious affiliation (32%), compared with just one-in-ten who are 65 and older (9%). And young adults today are much more likely to be unaffiliated than previous generations were at a similar stage in their lives.

These generational differences are consistent with other signs of a gradual softening of religious commitment among some (though by no means all) Americans in recent decades.”

15% of all baby boomers described themselves as religiously unaffiliated.

Related post: Despite the drop in religious attendence and self-identification with a specific group, most baby boomers would describe themselves as “spiritual.”  Can spirituality be a marketing motivator?