The resources we share for understanding 50+ consumers are quite varied, so it shouldn’t surprise us that a recap of top links would be as well. Here they are — the articles, white papers, etc. from the last two weeks that garnered the most attention from Creating Results’ followers on Twitter, Facebook and LinkedIn.

1. MOST CLICKED: 2 ways to improve the effectiveness of your website with baby boomers & beyond http://bit.ly/TEqUbW

“Consider society when Boomers and Xers were at a similar age and life stage. At  those times, the only real platforms they had to showcase the things they cared  about—personally, politically or otherwise—were things like bumper stickers and  t-shirts. Now, in addition to those “old-school” options, Millennials have  social networks. When they are passionate about anything from a political stance  to pictures of their family to LOL cats, they can use their mobile device and  quickly tell their 231 closest friends all about it. In an instant. What drives  a Millennial to share a viewpoint on Facebook is the same sort of thing that  drove Boomers to wear “peace” t-shirts. They are simply telling the world what  they think, in the method that makes the most sense to them.”

“Younger employees’ use of social and collaborative technology actually lags behind that of older workers, according to a new survey from Citrix Online. The most enthusiastic adopters of social tools are older Baby Boomers, defined in the survey as those 55 years or older … Forrester Consulting conducted the survey for Citrix, overseeing an online survey of nearly 800 information workers evenly split among the U.S., U.K., France, Germany and Australia.”

The fact that it was a survey of only information workers makes me pause, however. On this blog, we do have several related posts that demonstrate how 50+ consumers in general use business-oriented social networking platform LinkedIn at higher rates than younger colleagues: 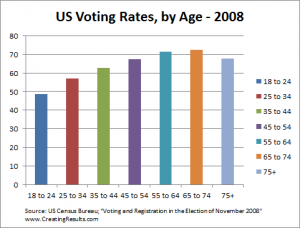 “The country added 1.15 million new households in the past year, following four years of meager growth averaging 650,000 new households annually, according to data from the U.S. Census Bureau … The recent uptick in household formation suggests that things are picking up for young Americans.” Read the whole post: http://bit.ly/Sf7KIa

If the boomerang kids do start to leave the nest, we guess there will be a lot more peace and Like-ing going around … Happy Monday!
TAGS Lennar, LinkedIn
CATEGORIES 50+, 60+, Boomers, Gen X, Marketing, Millennials/Gen Y, Social Networking

Which Social Networks are Boomers and Seniors Using Now?

Which Social Networks are Boomers and Seniors Using Now?