Mature Marketing Links of the Week – Seniors Unhappy With, Ignored by Advertising

Monday, Monday … you sneaky thing. Already a new week is upon us and, with it, our recap of the articles and links that got the most attention from marketing and advertising professionals this past week. 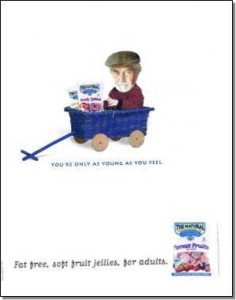 With ads like this, is it any wonder seniors don’t feel they’re represented with respect?

1. MOST CLICKED: Seniors say they don’t like the way they’re portrayed in advertising. It’s either “too good to be true” or “sick and feeble.” As MediaPost reported (http://bit.ly/YLcbVA),

“A mere 47% said they felt that seniors are portrayed ‘as people to be respected.’ It probably doesn’t help that most find ads targeting them uninformative, with just 31% finding value in ads for senior living and financial services, and 29% for ads pharmaceuticals.”

Wow. As sometimes happens, even more insights are found in the comments on this article. Richard Hammer wrote:

“I am the target audience that these advertisers are trying to reach. I am here to tell you that I am totally turned off by the ads targeted towards my age group. And that’s because of the three categories that these ads fall into. Senior Living. Pharmaceutical. Financial Services. Old age. Sickness. Poverty. Actors portraying stereotypes that belong to my fathers generation, not to mine. I am in my 60s and things still go better with Coke, The Pillsbury dough boy pops out of my oven on occasion. And Mr. Clean is alive and well and living under my sink. What I wouldn’t give to see a spot for Coca Cola with 60 somethings playing frisbee on the beach.”

Coincidentally, public radio’s Marketplace called Creating Results on Friday to ask why it is that Coca-Cola and other big companies don’t do just that.

Here’s what our team had to say about advertising to seniors on Friday’s show:

What do YOU think? Why would advertisers NOT want to reach viewers, simply because they’re in their 60s? Share your comments below.

* Almost half (48%) of older adults participating in the 2014 United States of Aging survey said they would move to an assisted living community if they could no longer care for themselves. Read more via LeadingAge: http://bit.ly/1uOvtTM

* 13 Writing Rules from the terrifically-talented Ann Handley of MarketingProfs: http://bit.ly/1uA0s7y