Another summer week has gone whooshing by, and for some of our readers it may seem summer itself has whooshed. Ice cream shops warn of limited hours. School buses once more set the pace on city streets. Kids are either back in class or counting down the hours remaining to finish that one book they’ve ignored for months …

But at Creating Results we’re living in the past. The past week, at least. As we do each Monday, we’re recapping the links of the past week that got the most attention from mature marketing pros.

1. MOST SHARED: Charities must adapt to ageing population – or miss out on volunteers, says Lynne Berry, the chair of the UK’s Commission on Voluntary Sector and Ageing.

Berry’s op-ed in The Guardian introduced the commission’s final report, called “Decision Time,” a deliberately foreboding title. On the plus side, she writes, “if people hitting 65 keep donating time and money at the same rate as today’s older population, it’ll be worth the equivalent of £6.5bn to the sector over the next 20 years.”

“Voluntary organisations could be rich in many ways.

But there’s a hitch. In the course of 18 months’ research, the commission found little evidence that the voluntary sector was ready to grasp this prize. We heard two things all too regularly: that such-and-such a charity didn’t work with old people and therefore had no need to think about the ageing population; and that more elderly people means a looming social care crisis – and little else. As I say at the beginning of the report, civil society is gripped by a collective failure of imagination.” 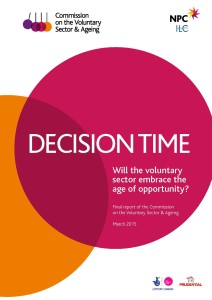 I really appreciated Berry’s call to action — she asks charities to begin marketing themselves as the place where older workers can retrain, a place where life is filled with purpose and connections.

In order to make this marketing shift, non-profit organizations first need to shift how they see the volunteers. Will aging Boomers and Silent Generation volunteers be simply envelope stuffers and greeters or will the organizations take advantage of all they have to offer?

Is YOUR organization on track to attract the time, talent and treasure of older volunteers? Share your thoughts and any tips you have for recruiting and developing Boomer and senior volunteers below.

2. MOST CLICKED: Those who know me know I’m not just fanatical about marketing to older adults, I’m fanatical about NPR’s Pop Culture Happy Hour. (Yup, unabashed pop culture junkie.) It was exciting to see my personal and professional passions intersect when host Linda Holmes recently wrote that “Learning to market to older audiences is nothing but a net gain.” This is just what I said to Marketplace radio last year!

Holmes was writing about the world’s largest and most successful video store: Netflix. Reflecting on what she’d seen at this year’s Television Critics Association tour, she said the big TV networks were all about brand – “Who we are, what we stand for, what we’re known for, what we do best: this all means ‘brand,’ rounded to the nearest vetted official blah-dee-blah.”*

In contrast, Netflix has everything from high-brow documentaries to low-brow box office failures. (We used to call them “straight-to-video.”) They don’t have a set brand. Subscribers can find whatever floats their video boat, from crass cartoons to Downton Abbey.

What does this have to do with mature marketing?

Netflix has picked up Longmire, a modern Western that was on A&E for three years and was not dropped for a lack of audience but because that passionate audience was older. Holmes quotes Ted Sarandos of Netflix as saying “You had a very hungry audience that was not going to get to watch that show because they were the wrong age for an advertising demographic.”

Again, in contrast to the traditional networks, Netflix doesn’t rely on advertisers. They recognize that video viewers of any age will pay for programming they enjoy. So Netflix can — and does! — appeal to older users.

“A PricewaterhouseCoopers report at the end of 2014 showed that just in the time between 2013 and 2014, viewers 50-59 who had cable became massively more likely to also have Netflix running alongside it. In just that year, the percentage of people with cable from age 50-59 who also had Netflix increased from 19 percent to 58 percent. That’s an enormous increase, to the point where it’s a bit hard to believe. But even if we assumed it to be overstated in that report to some degree, Netflix would still be making great strides with older audiences.”

And here’s where my worlds intersect. Last year, we were given the opportunity to talk about that “wrong age demographic” on Marketplace. The occasion was the cancellation of Longmire. Our take?

“There are a few myths when we talk about older people. Older adults are stuck in their ways. They’re not going to try new brands. So why should I even bother advertising to them, right? Well, my grandmother would say, ‘Pshaw!'”

We’re excited to see an innovative company realize the net gain in marketing to (and programming for) older adults. To quote my grandmother once again, “ain’t that cunning?”

* While here I’ve called out the parts of the article that related to aging, the piece has many good points regarding brands — and the potential perils of branding. Linda Holmes’ last paragraph is must-read-TV.