While the days are getting shorter and the leaves are quickly falling, there still may be time to get that Fall roadtrip in. In that spirit, we look today at how advertisers are portraying the mature car shopper and driver, and how they are struggling to walk a fine line between insulting and amusing.

1. MOST SHARED: In a recent NPR radio interview, NPR’s Scott Simon and correspondent Ina Jaffe discussed the idea that car ads are becoming “Boomer-averse.” Jaffe, who covers aging, noticed what seems to be part of a trend in car advertising.

So how are these ads being received?

Jaffe reveals, “there are bunch of online comments and articles in the trades by people who think these commercials are hilarious, though one column I read thought the ads were so disrespectful, it called them elder abuse.”

Some of our Twitter followers disagreed, and our own team was torn, as seen in this conversation: 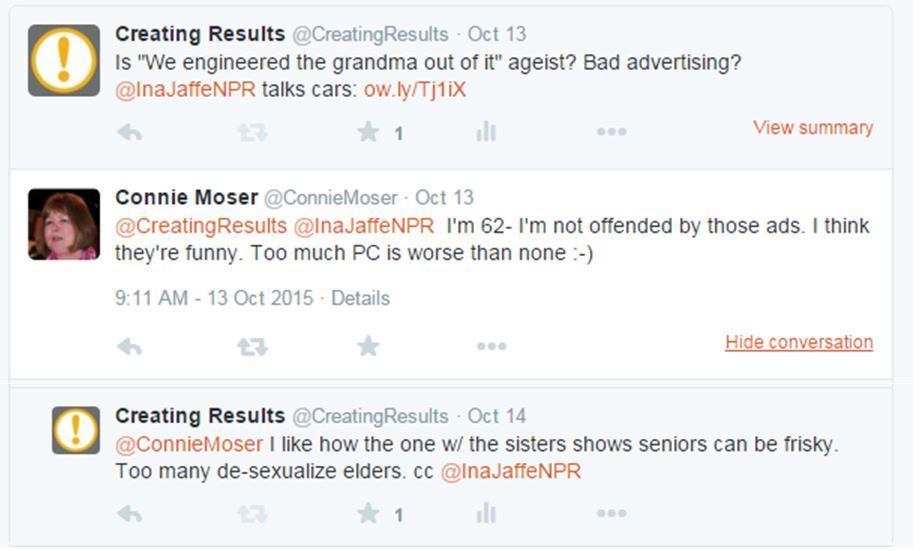 Listen to the full interview and then use the comments section below to let us know what you think about this car advertising trend related to older drivers. 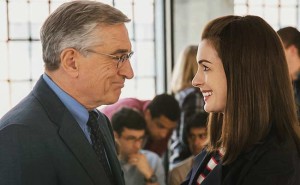 Mediapost.com looked at a Washington Post article that recently examined the “obsession with young talent” in advertising and marketing agencies and how this may be a handicap in reaching older consumers.

In the Post article, 60-year-old author Lisa Reswick, who is in the advertising field, discusses the trials, tribulations and challenges of working for an agency where she takes orders from a boss whose mother is younger than she is.

She explains: “This obsession with young talent may be short-sighted…people older than 50 have double the discretionary spending power of any other age group. The average head of household is 52. The average new car buyer is 56. The average Mac user is 54. So marketers must appeal to older consumers and may soon regret banishing everyone who saw the Beatles sing ‘I Want to Hold Your Hand’ live on the ‘Ed Sullivan Show.’ In your 20s and 30s, it’s pretty hard to understand the mind-set, needs and tastes of those decades older.”

AARP recently has gotten in on the game, launching its own ad agency to help brands promote their products to the 50+ crowd.

But of course we at Creating Results figured this out a long time ago. While we have a lot of bright, young and mid-career talent at our agency, half of our staff is over 50, and those of us in this 50+ crowd bring not only life experience but a deep understanding of the mature market. After all, that market is us! And yes, my boss (and his boss) are younger than I am.