My brother finally gave in and joined the social media world this week when he unveiled his Facebook profile. For years, people would ask him what he was waiting for, and his response was always “not EVERYONE is social.”

According to Pew Research, while not everyone embraces social media platforms, the number of those who avoid them is shrinking. In fact, they found that about 7 in 10 individuals across all age groups use social media.

Pew recently updated their annual social media research with information on social media use by age group. For those who target boomers and beyond, this information is particularly helpful in the ever-growing social media sphere when it comes to making strategic decisions about what platforms are best suited for reaching your market.

Here’s a recap of the latest findings: 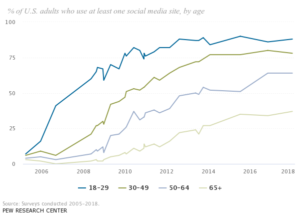 1. Usage among mature consumers is growing:

The new information is specifically interesting among the 65+ group. While this cohort uses social media the least, usage has been steadily increasing since 2015, with 37% reporting use this year. The 50-64 age group has increased over the last three years as well, from 50 to 64%.

It should be no surprise that Facebook consistently is ranked the most used social media platform across all ages, with 65% of those ages 50 to 64 noting Facebook usage. Instagram usage has grown steadily, with WhatsApp seeing the lowest percentage of usage among all age groups.

Interestingly, YouTube boasts even higher usage than Facebook among those ages 50-64, and just 1% lower in the 65+ age group. It’s worth keeping an eye on Instagram and Twitter, which have seen significant growth in older adult usage. In the past five years, Instagram usage among 50- to 64-year-olds has increased from 6% to 21%! 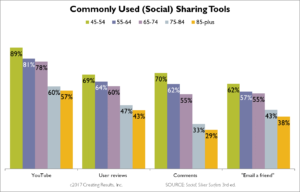 These findings are consistent with our research, too. When Creating Results conducted Social, Silver Surfers, our national study of website and social media usage, we also found that Facebook was the primary social media platform that baby boomers and seniors gravitated toward, however, when it came to social sharing tools (which is important for measuring channel performance), YouTube, which wasn’t noted as a popular platform in Pew’s poll until 2018, took first place.

3. Women tend to be more social than men:

Across all platforms, women reported a higher usage of social media platforms. However, other factors also impacted usage, including gender and education. For those targeting boomers and beyond, LinkedIn isn’t the best platform to focus efforts: While older adults may be working longer, their usage of LinkedIn has stagnated or declined.