Pew: Social Media Adoption by 65+ Seniors Has Tripled In the Last Four Years

Looks like we need to update the chart shared in yesterday’s post! The Pew Internet & American Life Project has released new data on social networking, reporting that now 72% of all online adults are using social sites such as Facebook and Twitter.  Per the study,

You can see the increasing use of social networking by all age groups in the following chart: 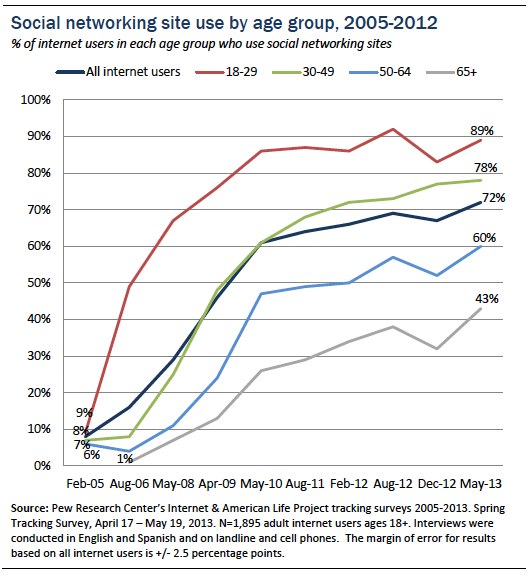 Pew also chose to ask about Twitter as a stand-alone question, and found that 13% of Internet users aged 50-64 use the service. Only 5% of wired 65+ers are on Twitter.

Our own 2013 Social, Silver Surfers research found higher rates of Twitter use than Pew — nearly 40% of our Baby Boomer respondents aged 50-64 said they had at least tried the service, along with 26% of 65+ seniors. However, our data showed Facebook continues to be the more dominant network among matures. (Sign up for alerts related to Social, Silver Surfers here.)

Social Networks on the Rise, Email for Everyone, Finds Pew

Social Networks on the Rise, Email for Everyone, Finds Pew