Two years ago, Harris Interactive asked Americans what they’d re-name their generation, if they could.  A full quarter of both Millennials and Gen X chose “Generation Tech.”  That finding is confirmed in Pew’s new research which reported that – especially for the 18-29 year olds -, technology is what defines them as distinct from Boomers and beyond. 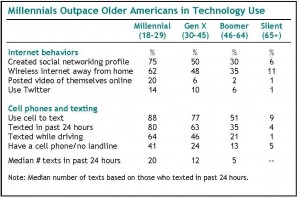 It’s not just use of technology but attitude that distinguishes Millennials and Gen Xers from their elders.

The upshot for those marketing to Baby Boomers and Silent Generation?  Many elders are tech savvy and active online.  But it’s not what defines them.  Don’t forget traditional marketing techniques such as direct mail or print advertising when trying to motivate 50+ consumers.

60+, Boomers, Internet, Marketing
Why Marketers Should Focus on Baby Boomers & Their Technology Usage

Why Marketers Should Focus on Baby Boomers & Their Technology Usage