Mature Marketing and the Longevity Revolution

When I was growing up, there was old (anyone over 30), there was really old (my Nana – then in her mid 60s) and there was George Burns. Born this day in 1896, Burns graced the silver screen and did nothing less than give God a new image. He also stood out in my mind because – at the time – it was really rare for someone to live to 100 … not to mention living an active life at 100.

Now, 65-year-olds are younger than ever and 100-year-olds aren’t as rare as they once were. There are an estimated 72,000 centenarians in the United States today and there could be as many as a million by 2050.  As the Stanford Center on Longevity puts it in the New Realities of an Older America:

In less than one century, life expectancy has increased an average of 30 years in developed regions of the world. This added longevity is, at once, among the most remarkable achievements in all human history and one of our greatest challenges. More and more Americans are reaching old age, and older Americans are making up a larger share of our total population. 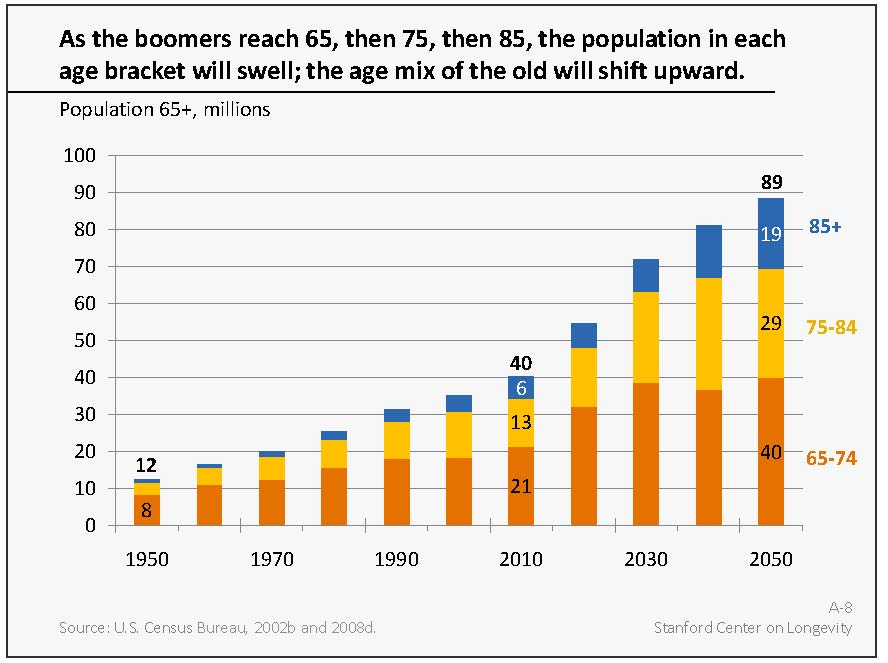 Here are some ideas on what the longevity revolution means for those who are marketing to Baby Boomers and beyond:

• Stanford Center’s excellent report notes that “the number of old people – age 65 and over – will double over the next 30 years.” The description of anyone over 65 as OLD conflicts with the way Baby Boomers and Silent Generation members see themselves. How could they be old when Boomers are launching businesses in record numbers? Their neighbors are getting re-married at 82? Or taking Hollywood by storm at 89, like Betty White?

• If you’re pitching your product or service with a message of “perfect for your last years,” those last years will last longer than ever. What’s your guarantee? Older consumers will want assurance they’re making the right choice.

• Many marketers are focusing on what Boomers will inherit but for many, that ship won’t come in for another 10-20 years. Until then, Boomers will be spending their time & money on maintaining their own lifestyle and health, as well as caring for older parents/family members.

Marketers should take a cue from their Baby Boomer targets and adjust their timeframe. You must build brand relationships with Baby Boomers that last longer than a Presidents Weekend special. Work towards your monthly sales goals but don’t discount long leads – invest in those relationships and give them time to pay off.

Boomers are in it for the long haul, and your organization needs to be as well.