I am not sure we’ve settled on an “unofficial” name for Jonas, the winter storm that hit the Northeast this past weekend. Snowpocalypse seems to be a top contender! While some were digging out of the snow banks, we were doing what we always do: keeping up with what’s going on “out there.”

For the shovelers AND computer jockeys alike, here’s a look at the top posts from last week. Top articles last week looked at the concerns of investors and financiers of senior living communities, the rising 100+ population, and where people moved in 2015.

1. MOST SHARED: Investment and finance groups with a stake in the senior living market have to consider a wide range of factors, such as supply and demand characteristics, the external environment, the consumer and organizational sophistication when trying to map the future of the senior living sector.

Insights offered at The Future of Senior Living, Ziegler’s 18th Annual Senior Living Finance + Strategy Conference in October 2015, continue to prove useful. Experts at the event discussed the financial future of this sector, from the changing consumer to affiliations and partnerships and the role they play in the implementation of the Affordable Care Act.

Ziegler’s Dan Hermann offered a potential model for a full-service senior living organization that spans all income levels and offers full continuum of care, as shown in the graphic below. 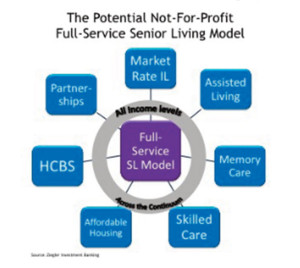 Another speaker at the event, David Ferguson, President and CEO of American Baptist Homes of the West (ABHOW), suggested that not-for-profit providers can be guilty of thinking small. He encouraged them to “think big and be bold” and do so from a position of strategic strength. What would thinking mean for your organization?

2. MOST CLICKED: The number of Americans age 100 and older — those born during Woodrow Wilson’s administration and earlier — is up by 44 percent since 2000, federal health officials reported Thursday. A New York Times article highlights these numbers from the Centers for Disease Control and Prevention.

Number of People Over 100

Baby Boomers have started to enter retirement and will soon be bumping up the numbers of the elderly to record levels. Experts are warning that the United States is unprepared to handle such large numbers of seniors, especially as the life expectancy of older people continues to rise. So what does this mean for the senior living industry?

3. Also of note: Where are Americans moving to….and from, these days? The Fiscal Times recently looked at a United Van Lines National Movers Study that found that people are flocking to places with more jobs and green spaces, and choosing to leave behind colder temperatures and high housing prices.

The annual National Movers Study looked at states that people moved to and from throughout 2015 based on data from 128,000 moves across the 48 continental states and the District of Columbia. The states that had the highest percentage of inbound moves included Oregon, Washington and Southern states such as South Carolina and North Carolina.

The report was not segmented by age, but Michael Stoll, an economist at the University of California, Los Angeles, was quoted as saying:

“The aging Boomer population is driving relocation from the Northeast and Midwest to the West and South, as more and more people retire to warmer regions.”

What impact will these trends have on Baby Boomers and Seniors looking for a retirement home?

Mature Marketing and the Longevity Revolution