Baby Boomer Bashing: I just don’t get it

When Chuck Nyren once called me an “honorary baby boomer,” I couldn’t have been prouder. When my boss said “What are you, 80?” after I commented on the neighbor’s new tramp stamp (easily seen from my office window … on a 30-degree day in February), I was more flattered than insulted.

I may be GenX but my job for the last eight years has been to try to understand these older generations in such a way that I can, on behalf of clients, connect with them and motivate them to act. So being told I’m thinking as someone older than my years — That’s praise.

Another part of my job is to understand digital media in such a way that I can, on behalf of clients, connect with older adults via Facebook and YouTube and blogs (oh, my!). Recently we added WordPress SEO by Yoast to this very blog.  I was shocked when typing in the “focus keyword” a drop-down menu appeared with the following suggestions: 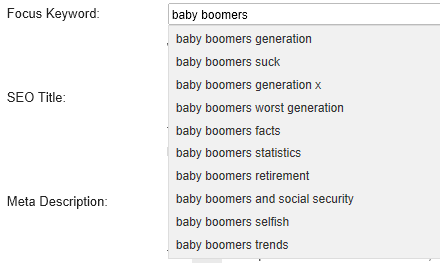 Take any other group descriptor — say, women or Christian — and imagine your reaction if you’d seen a list of suggestions like that. “Women selfish”? “Christians worst group”?

Do baby boomers suck? Here’s what I know about US Baby Boomers. They were born between 1946 and 1964, which makes them between 67 and 49 years old. There are more than 78 million of them.

That’s it. That’s what we know for sure.

When NPR dared to call a 71-year-old woman “elderly” in a recent headline, the backlash was such that it spawned three blog posts and a thoughtful discussion about language. Why then can so many people write blog posts with a theme of “baby boomers suck,” that not only isn’t it challenged it becomes a suggested keyword?

I’m not sure which part of my personality is most offended: the honorary baby boomer, the 80-year-old, the Gen Xer … I think it’s most likely THE HUMAN in me.

Baby boomer bashing? I just don’t get it.

50+, Boomers, Healthcare - CCRCs, Housing, Retirement
Mature Marketing Links of the Week – Is that All You Blighters Can Do?

Mature Marketing Links of the Week – Is that All You Blighters Can Do?