Smartphone, Tablet Use by Age and Gender

The Donald W. Reynolds Journalism Institute has released a report on Mobile News trends that includes very useful data related to smartphone and tablet use by age and gender.

While news reading on smartphones by users over 65 is much lower than other age groups, check out the strong percentage of tablet users over 65 who are consuming news this way:

Do baby boomers and  seniors even own mobile devices such as smartphones? In June of 2013, Nielsen reported 6 in 10 mobile subscribers had smartphones.

“Overall, women make up the majority of smartphone owners in the U.S., as more than three out of five use them. Ownership was highest among Millennials aged 25-34 at 78 percent, and three out of four mobile users aged 18-24 already own smartphones. Penetration of smartphones remained lowest among Americans aged 55+ (42%), but this group is catching up fast, as penetration among this demographic has nearly doubled over the past year.” 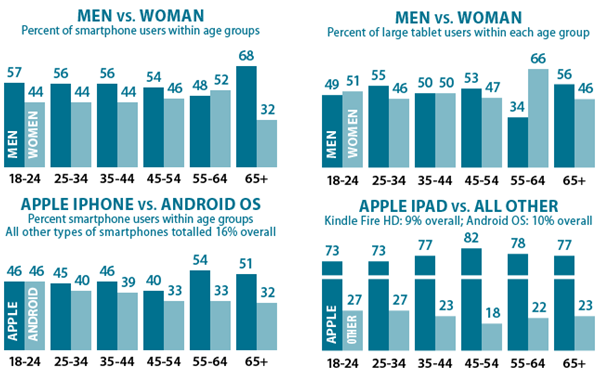 * Want to attract female older boomers? Create a course or contest around an iPad! (Look at that spike in tablet users by age group!)
* Is your target the senior man? Consider a class that engages him around an iPhone.
* Don’t underestimate mobile as a channel for marketing to active adults. (Don’t overestimate it either.)
* Be sure your websites are friendly to Apple OS AND considerate of older eyes/fingers.

RELATED: When writing for MEDIA Magazine’s fall issue on the Future of Media, we heralded tablets as the future of Baby Boomer media consumption. Read the article on whatever device you prefer — http://bit.ly/X7AeWh.