Mirror, Mirror, On the Generational Wall – New Insights from Pew

Many moons ago when Creating Results began to focus exclusively on marketing to boomers and seniors there was a “basic rule” for choosing images: Pick photos that showed people 10 to 15 years younger than the age you were targeting. Why? Because, “they” said, that’s how people saw themselves. 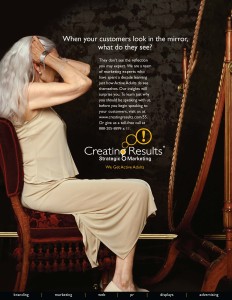 Literature and movies have long played with the idea of people’s perceptions of themselves as different from reality. Those perceptions extend to the labels we choose to accept or reject for our tribes and ourselves. Some anecdotes:

The Pew Research Center recently conducted a study that confirmed this “me-search.”  Pretty much every cohort except the Baby Boomers rejects the label given their group. Many apparently reject more than the label; they reject the entire classification system given them by demographers and marketers.

The oldest cohort of Americans is by far the least likely to embrace a generational label. Just 18% of those ages 70 to 87 (the age range of the Silent Generation) actually see themselves as part of the “Silent Generation.” Far more Silents consider themselves part of adjoining generations, either Boomers (34%) or the Greatest Generation (also 34%).’

Advertisers have for decades entirely ignored the Silent Generation in favor of the bigger, boisterous Boomers. American media and culture have lionized the Greatest Generation. Therefore perhaps it isn’t as surprising that the small group in their shadow might prefer to identify with those in the sunlight. I am surprised by the idea that a third of Millennials would lean towards the X, however.

Pew’s researchers then asked what descriptions, positive and negative, each cohort felt fit them.

Silents and Boomers felt more favorable. Millennials and Gen Xers “are far more skeptical in assessing the strengths of their generations. And Millennials, in particular, stand out in their willingness to ascribe negative stereotypes to their own generation.” Dick Stroud wrote “Blimey, the Millennials look like they have a crisis of confidence. That is a bit worrying since they are the ones that have to work and pay the tax to look after the Boomers!”

Smart marketers try to forge a connection with consumers by reflecting how they see themselves. (Even if their perceived reflections differ from reality.) As James Atkinson has written, “When prospects perceive that a product reflects an aspect of their self-concept, they form an emotional, personal connection with that product. An emotional connection with a product is the foundation of lifetime customer relationships.”

Pew’s latest study gives us an insight into the self-concept of the various generations. Picture how much more powerful your marketing can be if you incorporate reflections of these positive attributes:

To read more from Pew’s study, part of the American Trends Panel, follow this link: http://pewrsr.ch/1KoVfbw.

RELATED: Creating Results’ Photo Finish research ebook, with results from a study into the most effective imagery for marketing to boomers and seniors.

What’s your perception of this research? Help us see more clearly the impact of this post by commenting below.