Good morning! Each Monday we recap the top activity on our social channels the previous week — which links / resources got the most clicks, likes, shares, etc. on Twitter, Google Plus, LinkedIn and Facebook. Here are three items that caught the attention of mature marketing professionals.

1. MOST SHARED: Does it “pay to be gray”? Is there a “silver lining” to recent data showing the U.S. middle class is disappearing?

Married people are more likely to be in the upper tier, as are whites and Asians. Adults with no more than a high school education are most likely to have dropped out of the middle class and into the lower tier. Per Pew,

“The biggest winners since 1971 are people 65 and older. This age group was the only one that had a smaller share in the lower-income tier in 2015 than in 1971. Not coincidentally, the poverty rate among people 65 and older fell from 24.6% in 1970 to 10% in 2014. Evidence shows that rising Social Security benefits have played a key role in improving the economic status of older adults. The youngest adults, ages 18 to 29, are among the notable losers with a significant rise in their share in the lower-income tiers.”

What does this mean for those marketing to older adults? These shifts in economic wellbeing will have an impact on spending patterns, even if the concern is more psychological than real.  Reports of economic hardship and coverage of threats to Social Security funding will likely make seniors more cautious. Purchase journeys may become longer and require more touches from marketing and sales. How can you build your buyers’ confidence in a consistent and cost-effective way over the long haul?

RELATED: As we noted on this blog in June, at the same time as the U.S. middle class is shrinking overall, the middle income Boomer is one of the largest growing segments for housing.

2. MOST CLICKED: Half of Gen Xers now own what MarketingCharts labeled the “Tech Trio:” a smartphone, laptop or desktop computer, and a tablet. 27% of baby boomers own the same combination, along with 16% of 65+ seniors. 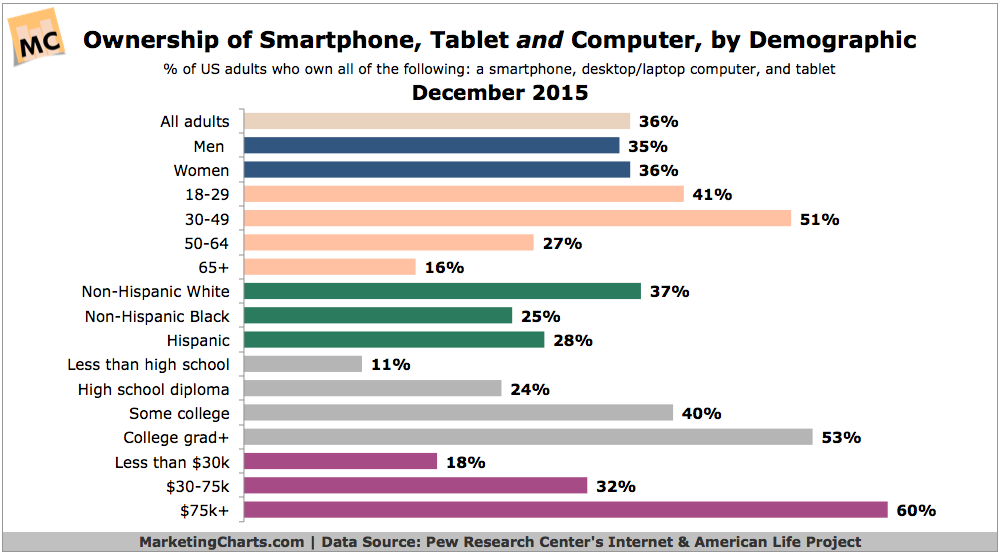 This should be more motivation to be sure your websites are responsive and accessible for all ages. Retirement community marketers: adult children will be looking at your competitor’s site on a laptop at work, and yours on a smartphone during lunch … Make sure their experience is a positive one!

Mirror, Mirror, On the Generational Wall – New Insights from Pew