Yesterday we shared four facts from a new Pew Research Center report on technology adoption by older people, specifically Americans over the age of 65. It was a story of Internet haves and have nots, as younger, more affluent seniors dive into the web while older, lower-income elders remain disconnected.

Overall, though, there has been significant, positive movement when it comes to seniors online. Here are a few nuggets from the new Pew report, and from Creating Results’ own national survey of Social, Silver Surfers. 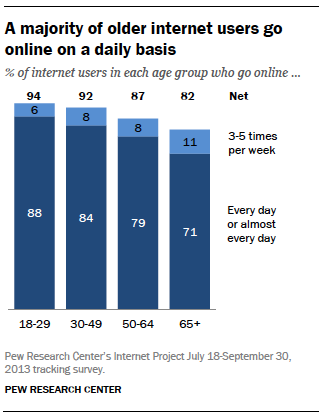 Per Pew, there has been a large jump in the use of the Internet by all seniors, rising six percentage points in one year. Now 59% of all Americans over 65 go online.

This is especially significant when you consider the physical challenges aging often imposes on seniors, making it hard to use digital devices. And considering the fact that most elders say they would need assistance to begin using this technology.

“Just 18% would feel comfortable learning to use a new technology device such as a smartphone or tablet on their own, while 77% indicate they would need someone to help walk them through the process. And among seniors who go online but do not currently use social networking sites such as Facebook or Twitter, 56% would need assistance if they wanted to use these sites to connect with friends or family members.”

Action Step: Helping elders get connected or comfortable with technology can be a marketing tool.

Consider hosting a Senior Tech Rally program, as  many active adult and senior living communities have. Or offer space in your clubhouse for ongoing classes run by a local organization. Seniors from throughout the area can sample the lifestyle you offer at an event that isn’t sales-y, promoting greater trust, appreciation and lead capture.

Remember that some 50+ers are already super-savvy with tech, and if they live in your community you should tap into their enthusiasm. That’s what Traditions of America at Silver Spring did. The 55+ lifestyle community has neighbors teaching neighbors — classes are “sold out”!

I was struck by Pew’s finding that while only 46% of online seniors (27% of all American seniors) use social networking sites, those who do are more engaged in all social avenues. 81% of older online social networkers say they are socializing with others by phone, in person or … yes … online on a daily/near-daily basis.

Isolation among elders is a big issue, with serious health implications. Other studies have found that Internet use can reduce rates of depression in elders. Yet another reason for caregivers, family members and housing operators to encourage Internet adoption.

Our own research found an increase in online social networking activity from 2010 (when we first surveyed 40+ Americans) to 2013, as this chart illustrates.

Pew didn’t put it this way, but I will: If 27% of Americans over 65 are online AND using social networking sites, that means 73% are not.

Action Step: Encourage social networking use and promote your own social platforms to homeowners, residents, prospects and influencers. Just be realistic about your expectations. As our Social, Silver Surfers research revealed, very few people of any age go on Facebook et al seeking to become engaged with brands.

4. Adoption of Mobile Devices by Seniors Up, Yet Still Lagging

While cellphone adoption still trails the general population (77% of seniors own one, vs. 91% of all Americans) there have been gains. Now, Pew reports, more than half of seniors in every subcategory own a cell, including 61% of those 80+.

Those with higher levels of education or income are also more likely to own cellphones, smartphones or tablets/e-readers.

Action Step: Start thinking about, testing and perhaps re-designing your emails and website for better mobile experience. Because whether older people are using desktops, smartphones or tablets, they’re more connected than ever and their expectations are rising.

RELATED: Where ARE these senior social networkers? This January 2014 post has the answer.

What do YOU think? Did you read the Pew report? Will you be taking any actions based on these new insights into technology adoption?

60+, Boomers, Internet, Marketing
Real Estate Logo Design – Learning the WHAT and WHY at HOW

Real Estate Logo Design – Learning the WHAT and WHY at HOW