TV and Newspapers Trump Social Networks for Influence on Seniors

What timing. The same day that Senior Housing News posed the question “Is Facebook the New Frontier for Marketing Retirement Communities to Seniors?” the Center for Media Research shared an answer: “No.”

Well, actually what they shared was survey data showing that when it comes to influence on consumers, TV is still King. And when it comes to older consumers, Newspapers are the Queen. As we’ve stated before, Facebook may grab headlines but TV grabs wallets.

Despite the catchy headline, Senior Housing News was really sharing data from the Pew Internet & American Life project that for the first time, more than half of American seniors are going online. 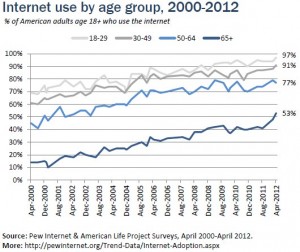 This is important news, and one of the reasons we love Senior Housing News – they consistently share good data that helps marketers and developers make smart decisions. Pew also found that “as of February 2012, one third (34%) of internet users ages 65 and older use social networking sites such as Facebook, and 18% do so on a typical day.” 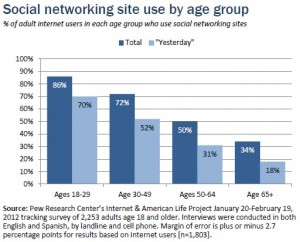 Both of these findings show positive growth among the online activities of seniors. So we’re not pooh-poohing. But here’s a little math for those marketing to baby boomers and beyond.

If 34% of online seniors are using a social platform “such as Facebook,” that comes to 7.2 million. And 33 million seniors are not.

“More questions are being asked through Facebook about retirement. Older Facebook users will pay attention to where their acquaintances are living. If their friends own a home in an active adult community or have used a home care service, users are asking about their experience and reviews through comments.”

Again, we’re not pooh-poohing. Facebook is one of the many channels we leverage in creating and implementing integrated marketing plans for our senior living clients. Facebook is an increasingly important element in marketing to 50+ consumers. It just may not be the “new frontier” that the Senior Housing News headline implied.

And Now A Word from our Sponsor …

The counterpoint to all that Facebook enthusiasm was research showing that when it comes to purchase decisions, the #1 most influential medium for all ages is TV: 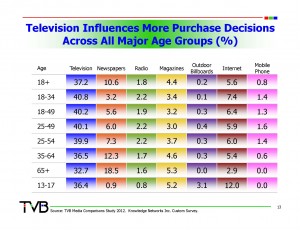 Notice that the influence of newspapers rises along with age. TVB also points out that 61% of all Americans over 18 are members of a social networking site. But, “6.8% of social network members made a purchase decision based on information from a social network” so that means “only 4% of adults 18+.” Compare that to the 37% who purchased based on TV.

(I encourage you to download the full deck from TVB. It’s got some great charts on the time spent with TV by age.)

Headline News You Can Use

Headlines are meant to be catchy, and the Senior Housing News item with Ross’ encouragement to incorporate Facebook into 65+ marketing was actually quite tempered. The news you can use is that now, more seniors than ever are online and more of those elders are using social platforms.

But if your higher ups didn’t read the whole piece and are asking you to boldly go where no senior living community has gone before, share this post so they’ll see past the headlines.

While new frontiers are worth exploring, results are critical. Research continues to show that TV and newspapers generate better results with seniors than social networks.

What do you think? Are we off base? Share your thoughts, opinions and experiences below.

The Importance of Online Reviews For Businesses in 2020

The Importance of Online Reviews For Businesses in 2020